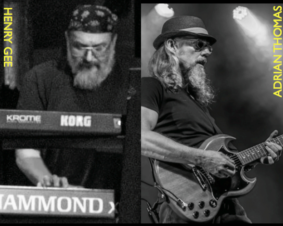 At least twenty years ago, Gee and Thomas were in the same band, both together, at once, simultaneously and at the same time. The band was called Itchy Fingers and played classic rock, blues, and some rock originals. As someone once said, much water has been passed since then.

By day, Gee is an author but kept his hand in with a variety of small-time blues and rock bands. Adrian became a pro musician teaching guitar, and playing guitar and drums in a variety of outfits notably the Voodoo Sheiks.

It was the Voodoo Sheiks that got Gee and Thomas back together. During the Recent You-Know-What, Thomas had started to explore home recording and had asked a number of his friends to send bits and pieces to his ongoing Blues Alliance collaboration (you can hear an example here).

Along the way he asked Gee to contribute keyboards to the Voodoo Sheik's single, Norm (now available through Apple Music). As it so happened, the Recent You-Know-What had done for Gee's most recent live band, and he, too, had started to explore home recording in his home studio Flabbey Road. You can hear some of his jazz-inflected noodling here.

One thing led to another, and, what with Gee finding a songwriting hot streak and a need for a guitarist better than him [that'll be any guitarist at all, then - Ed] to turn his ideas into reality, Adrian was only too happy to oblige.

The result was G&T.

The album Ice & A Slice (now available on Apple Music) and a collaboration that continues with the recording of a single (G&T's first cover version) and work on a new album.

To date, the collaboration has been entirely remote. Although ongoing, Thomas and Gee have communicated entirely electronically. They haven't even picked up the dog and bone. Even though they are musicians of (how to put this delicately) ... a certain vintage, their music making is just so modern.